We have been teetering between the Mountain Time Zone and the Pacific Time Zone over the past day. It’s interesting because I’m a car, the time on your phone changes relatively fast. When you’re traveling on a bike, however, it takes hours to actually pass through a time zone. You go half the day not knowing what time it actually is.

But today, we made it official!

We started climbing pretty early today. We knew we had two passes to climb, but we didn’t know much about them.

The first one was long, but it wasn’t too bad. We had a nice surprise at the top: the name of the pass! It was the perfect opportunity for a silly picture.

As silly as it sounds, we were super excited about getting over the next pass because it was named “Stinking Water Pass”. We had a few funny picture ideas for that one, but when we got to the top, the sign only said “summit”. 😟 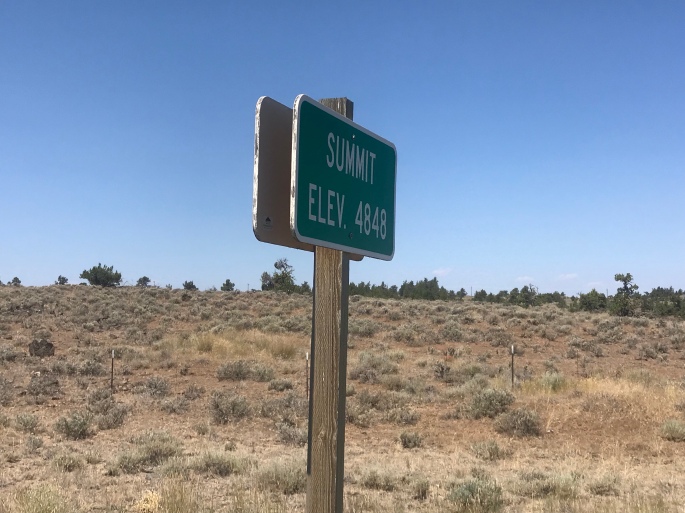 Stinking Water Pass really stunk…and I’m not talking about the smell. It was long and pretty darn steep. I never thought I was going to get to the top. Lately I have been able to ride over most of the passes without stopping, but I had to stop 4 or 5 times on this one! 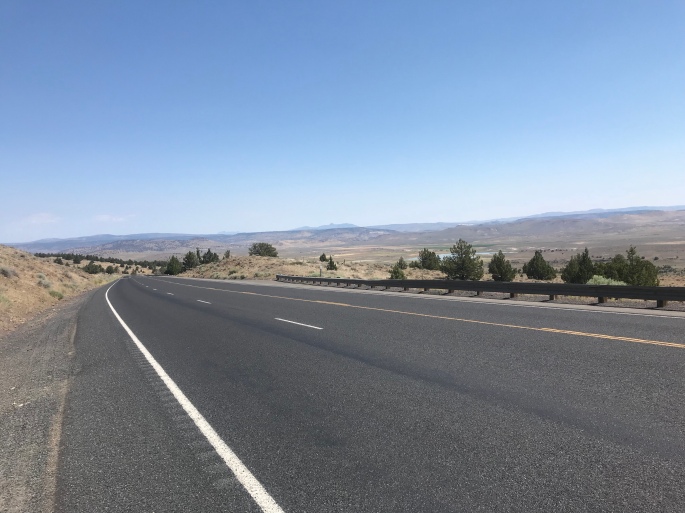 It was a relief to get over Stinking Water Pass. We made it to the gas station, our halfway point. We heated up some food in a microwave, ate, and relaxed for a bit. Masherra and I both picked out some earrings that were made locally by a Native American woman (I have a thing for earrings). Oh!!! And I found a Chaco Taco! I’ve been looking for one the whole trip. It was so good! 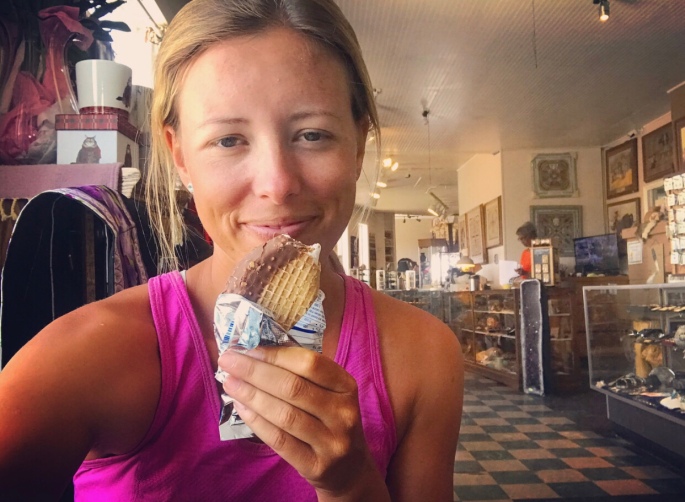 We only had 23 miles left after the gas station- and it was mostly flat!

So, let’s take a minute to talk about pavement. When you bike across America, you ride on all different types of pavement. Sometimes it’s new and smooth, sometimes it almost feels sticky and is hard to ride on, and sometimes it looks like gravel even though it’s paved.

Today, when I was riding on the shoulder, I became a bit more acquainted with the pavement. There was some dark, loose gravel that blended in with the surface of the pavement. I hit the loose gravel and my bike immediately skidded and I fell off sideways over my bike. I twisted my body so I could catch myself. It was a hard fall.

I stood up quickly and picked my bike up; I didn’t want anyone stopping to see if I was ok. As I stood up, blood trickled all down my leg. My leg was all scratched up.

I reached into my handlebar bag for a napkin, and immediately felt pain on my hand.

The gashes aren’t super big, but they’re deep. My hands feel bruised where I caught myself, and one of my fingers feels like it’s jammed. I’ve also got a bruise coming in pretty nicely on the side of my thigh.

I mean…a tiger’s gotta earn her stripes somehow, right? 😉 I’m thankful it wasn’t anything worse than some scrapes and bruises!!

So, we’ve got two more days of biking through the high desert, and then everything should start to green up again!! We are excited for some trees and greenness!!

Here in the next couple of days, we will start working out the logistics of shipping our bikes home and getting plane tickets.

I cannot believe we have 5 days left. I still have extremely mixed emotions about the trip ending. As I mentioned before, and probably will again, this is by far the hardest thing I’ve ever done, and my body is absolutely exhausted and ready for a break. I’m so ready to see those dear to my heart 💚, but it’s going to be hard closing the book on a dream I’ve had my entire life.

I can’t even fathom or even begin to process the emotions I’m going to feel when I dip that front tire into the Pacific Ocean.