Well, we were pretty excited to say goodbye to Idaho. After much discussion, Mash and I decided that, if we had to choose between Virginia and Idaho, we would rather ride across Virginia again.

I can’t believe I just typed that. 😳

Needless to say, we were extremely excited to get to Oregon…our last state line!!! When I saw the Oregon sign, I allllmost got emotional…but I was immediately distracted by the not-so-picturesque background of a neighborhood. Oh well, you can’t have your cake and eat it too, right?

Shortly after riding into Oregon, we stopped at a gas station to wait out the heat. It was around 100 degrees, and there was no way we were riding in the heat. We learned that lesson in Kansas. While we were stopped, we got the biggest drinks we could find, filled out some postcards, and did some route planning.

We knew that the next few days were going to be pretty desolate, but when we started looking closer to our route and the “towns” we would be passing through, we started to get worried.

What we discovered: 4 more days of basically nothing.

The towns we saw were tiny. They either had a gas station, or a diner…but not both…and who knows if they are actually open.

We wrote out our route plan for the next few days on a napkin, and started calling the gas stations and diners that we would be going by to make sure they would be open so we could at least get water. One lady even told us to call her and that she would get us anything we need.

After it cooled off a bit, we rode the remaining 23 miles to Vale. Vale is a town that is located on the Oregon Trail (the road we have been riding on closely follows the Oregon Trail), and there were all kinds of neat murals depicting scenes of the pioneers, fur traders, and Native Americans. The murals reminded me of the murals in Paducah! 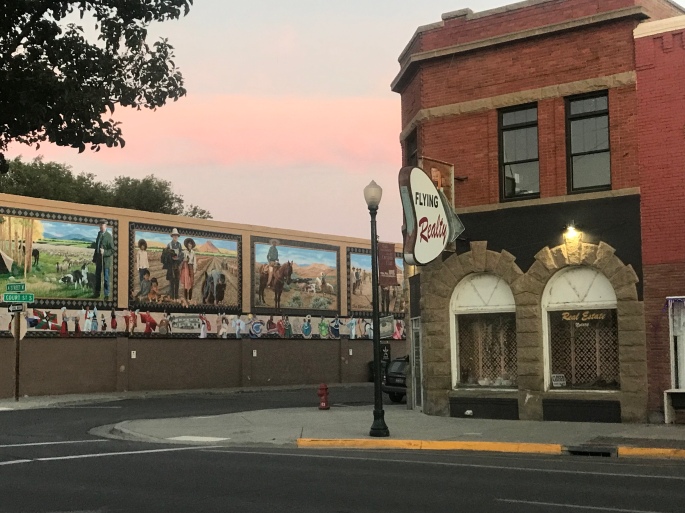 We ate supper at Mal’s Diner, which has apparently been operating since 1941. It was all decked out in 50’s decor and it reminded me of my 50’s musical I did at Sharpe during my first year. 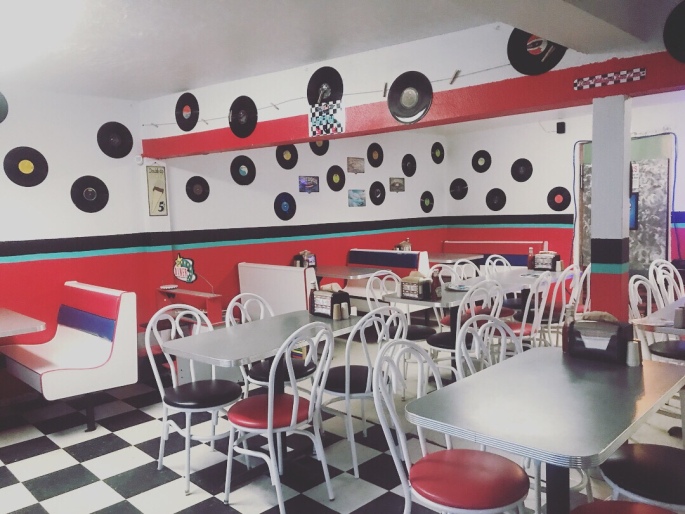 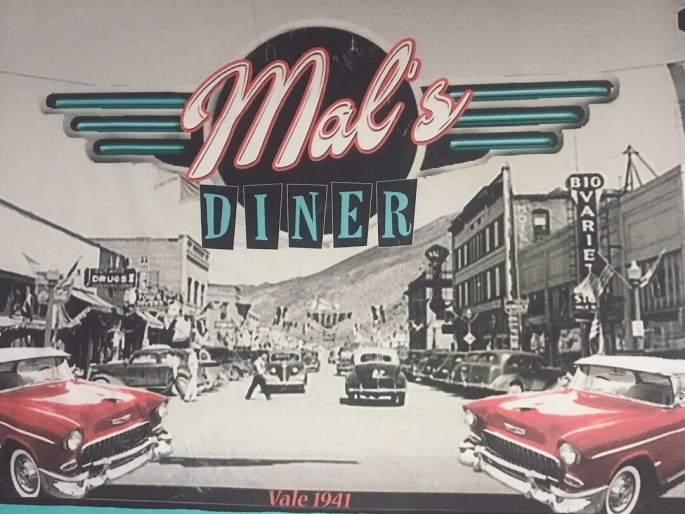 While we were eating, a elderly man asked to join us and started talking to us about our trip. Honestly, I didn’t feel like talking to anyone, but this man was really nice, and was super charismatic, and 2 minutes into our conversation, I was sold. He was a great person to talk to.

He wore a tucked-in plaid shirt, a straw fedora, and his blue eyes brightly shown through his large glasses. He had the biggest grin you’ve ever seen; a gap between his two front teeth. He was a farmer. And boy, he could talk. 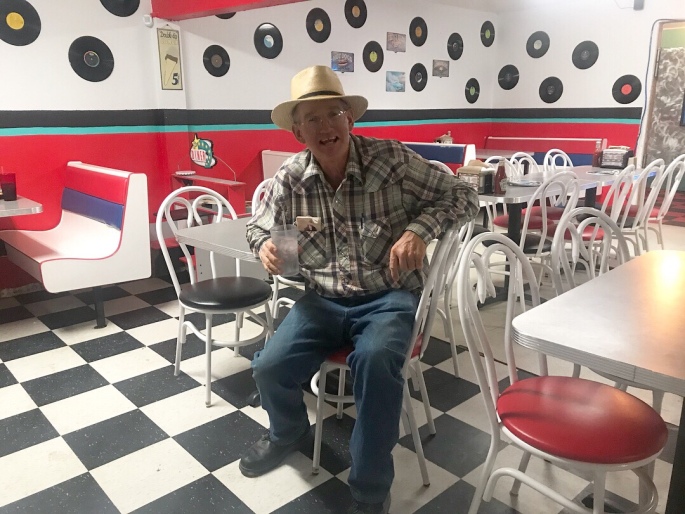 Something that I’ve come to realize on this trip: there’s always a piece of home everywhere you go….and in the little Oregon town of Vale, the combination of the murals and the conversation with the friendly farmer really reminded me of home.

We listened as he told us about, well, everything. He told us that he grew up in Jentura (the town we are in tonight) and how his niece went to school there. He told us how she was the only participant in the Christmas musical last year.

…because she is the only student in the entire school.

He also told us how the first ‘Miss Congeniality’ was from Jentura. He was full of stories and information. He was great to talk to.

After we left the diner, we camped behind a school. We got up pretty early, loaded up on plenty of water just in case the gas station was closed, and reluctantly headed away from our ‘safe place’: an actual town with actual stores and with actual food.

We still have about 3 more days in the high desert, but the landscape has definitely changed. Today, there were lots of huge, colorful hills and canyons, a small river winding in between them like a snake.

At one point, Masherra stopped and was pointing down below…

Animals are pretty much the best, but otters?!?! They were floating down the river too fast, so I didn’t get a picture, but they were super cute.

On a side note, Craig informed me that otter mates hold hands when they sleep so they don’t get separated!!!!!! 😍💚😍💚

Oh, and then a huge deer leaped out in front of us. He had the prettiest antlers and he was leaping like a reindeer across the road and through the field. I didn’t get a picture of him either, but he was the prettiest deer of all the deers.

We stopped at the only gas station that we would come across today, and went inside. It was owned by a man who actually lived in a house attached to a gas station. The actual store part was so tiny, only 5 people could comfortably walk around.

A lady walked in and asked, “Are you two girls the bikers?”

She told us that she recognized us, and said that she was certain that she had seen a picture of me and my bike on Facebook. She told us she was from Florida, has lived in Virginia, and now lives here in Oregon.

Who knows…but it was interesting!

She actually bought my drink and gave us $20!

I think I was half asleep or something in that picture. Or maybe exhausted from biking thousands of miles. 😬🤷🏼‍♀️

We continued on, and the landscape stayed the same. It was fun to look at for a while, and I don’t want you to think I didn’t appreciate the scenery, because I did…but after a while it felt like I was riding through a high desert labyrinth, snaking around the base of ginormous hills. 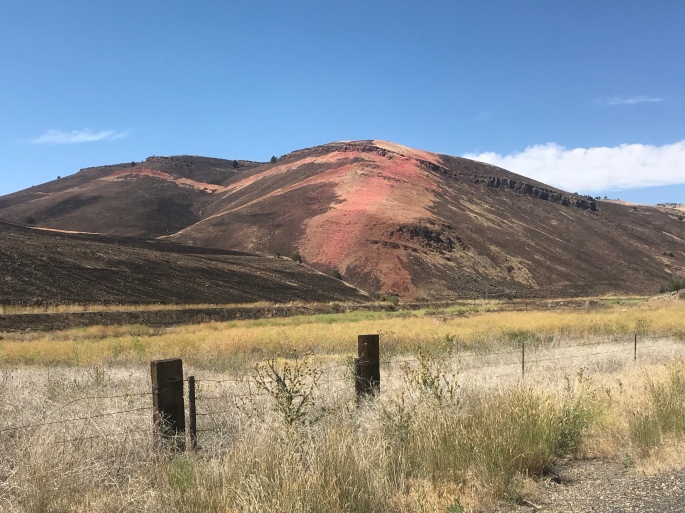 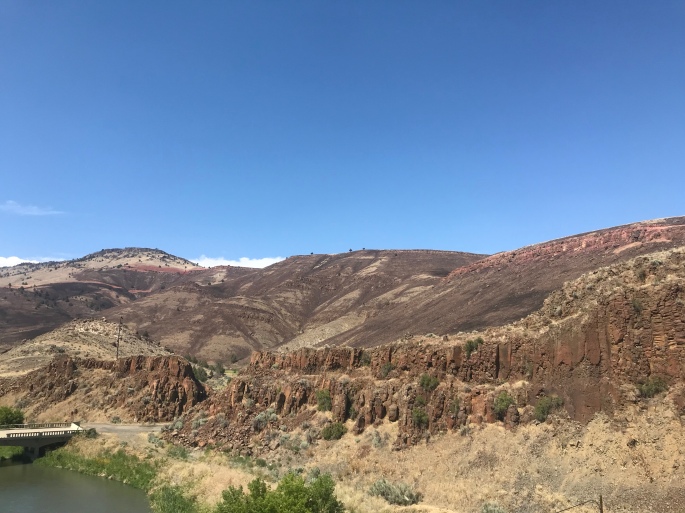 We finally made it to Juntura and ate at another, you guessed it, diner!

Is there a world record for the number of diners someone has eaten at in one summer??

We decided to put the $20 the lady gave us earlier in the day towards one of the 6 hotel rooms located by the diner. It was surprisingly clean.

Speaking of clean, we got to shower for the first time in almost a week! That means we should be pretty good to go for the next week until we get home. 😂😂😂

Well…..maybe I need to shower before getting on the plane.😁