The sun beating down on my tent was my alarm this morning. Nothing makes you want to get out of your tent faster than it being heated up by the sun.

We headed to a nearby gas station for breakfast. While we were there, we talked to Clayton (not sure if that’s his last name or first name). He goes around to all the gas stations for inspections and such. He was into bikes and got really excited when he saw we had Surly touring bikes. He was really helpful- he helped us look at all the up coming towns, telling us which ones had services and which ones did not. He was the perfect person to talk to, since he travels around to all the gas stations and knows the area really well. He was really nice and reminded me of Tom Hanks. 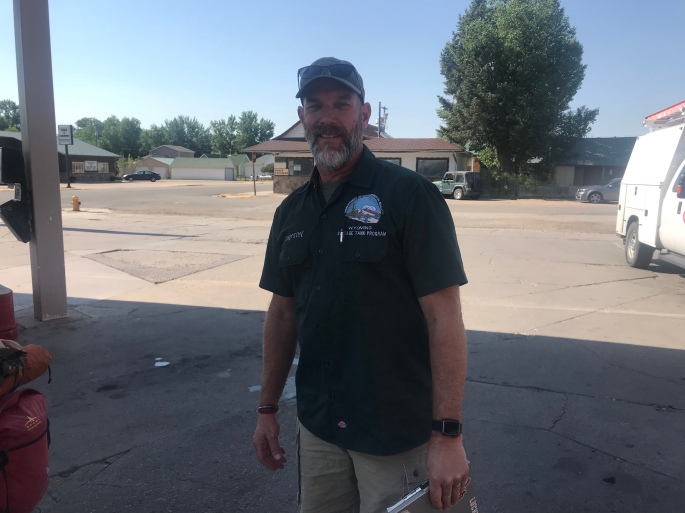 Then, Jerry pulled up!! Yesterday my parents told us how they met a biker named Jerry who was biking through the National Parks. They gave him water. He started up in Canada and came through Jasper, Banff, Glacier, Yellowstone, and the Tetons. He is continuing south! I would love to do that same bike tour. 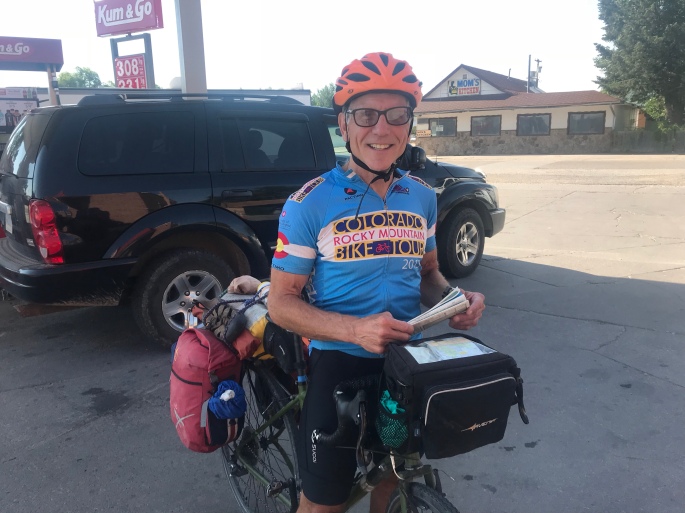 When we saw each other, we both immediately knew! Jerry said, “I met your parents,” and I said, “You’re Jerry!!”

Jerry was also great to talk to. He also looked at our maps and gave us tips on what was ahead.

Not too far down the road, we saw a couple from the UK on some type of recumbent tandem bike!! It was so neat looking! Riding with them was a man from San Diego. I loved their personalities!! They would be really fun to tour with. 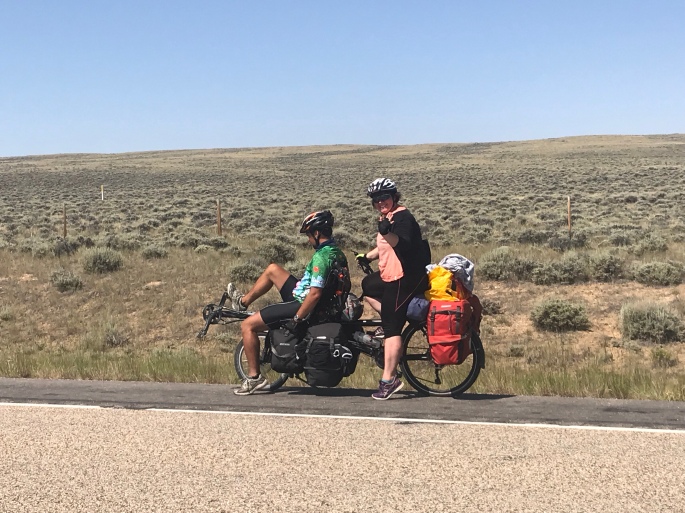 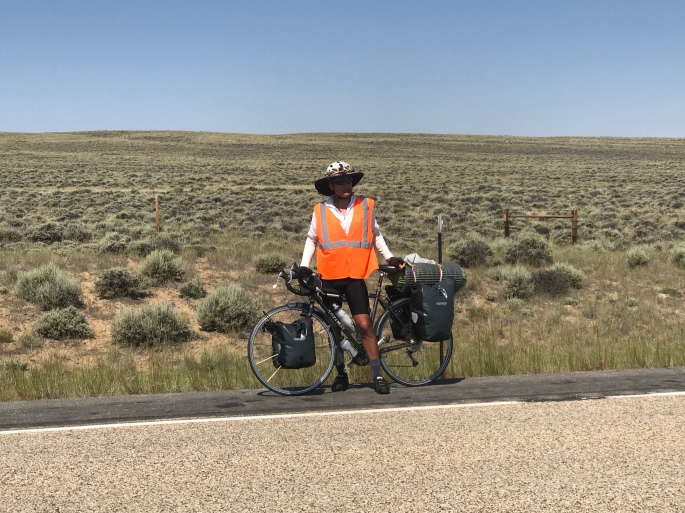 So. What did all these people have in common (other than being really nice and being into bikes)? They all made sure to share with us how tough of a stretch we had coming up.

Once we got to Rawlins, there would be nearly 130 miles of nothing, apparently…until you get to Lander.

Our map shows tiny little “towns”, but all the people we talked to today told us one was a ghost town, one didn’t have anything, and one has a gas station that may or may not be closed.

Honestly, I kind of knew how it was going to be. My parents and I have drove this road plenty of times on our way to the Tetons…….and it was bad enough in a car. So, I knew it was going to be rough on a bike. In fact, Jerry told us this part was the hardest part of his journey so far, and it was “psychologically difficult”.

Just outside of Rawlins, we stopped to get some lunch at a gas station. I was so planning on getting some ice cream, but decided to not give them any more of my $ when the gas station worker got onto us for eating our food in the floor. It was blazing hot outside and there was no shade.

If only he knew about our journey. But he didn’t. 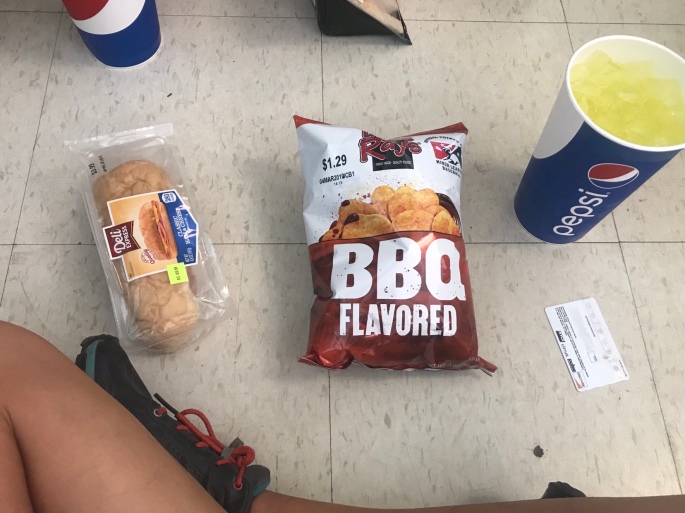 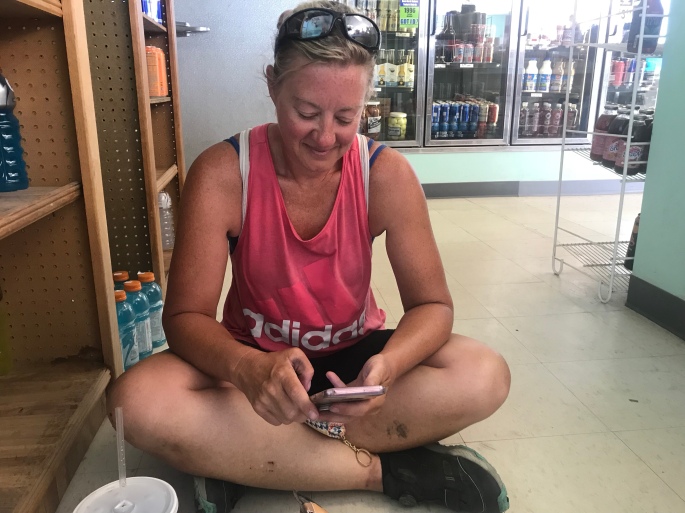 Another interesting part of our day: We got to ride on the interstate!

Well, maybe I need to reword that. We had to ride on the interstate.

Apparently it is legal to ride on the interstate in parts of Wyoming because there are no other roads! It got a little crazy because there was roadwork, and the interstate was really like a highway….with a million semi trucks passing you, RV’s, even a semi hauling a yacht. 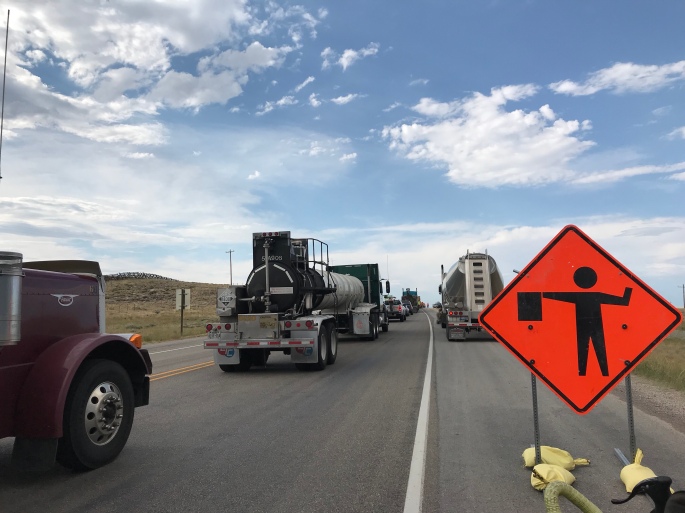 Needless to say, we pedaled hard for those 13 miles. We were glad to get back to our normal roads.

Once we got to Rawlins, we stopped at McDonald’s to eat and to charge all of our lights, phones, gps, etc.

Oh! I also ran into Tractor Supply and a man fixed my tent pole for me. I’ve been having issues with my tent poles, but I’ve been able to rig them up just fine! 😂 The man told me it was his “odd job” for the day! Haha!

We made sure to stock up on food and most importantly, water. I don’t even know how many water bottles I have right now, but I also filled up my camelback bladder. It doesn’t look big in the picture, but it holds a lot of water. We have to have enough to last us 2 full days of riding, and enough to cook with, since there are no gas stations or restaurants.

And it weighs a lot. 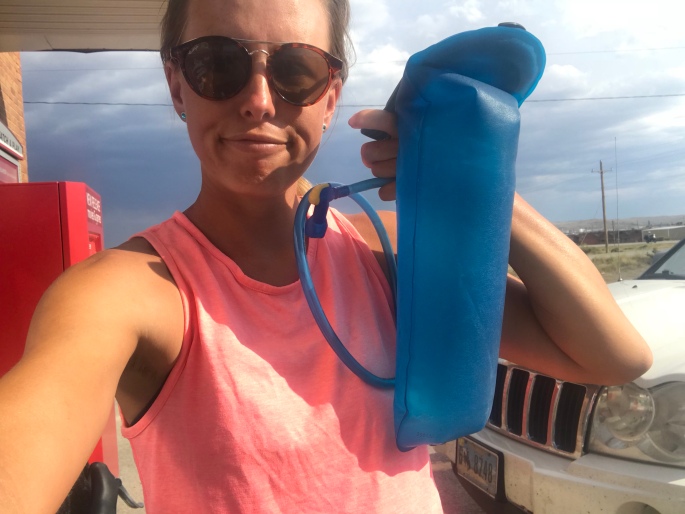 Masherra and I were laughing as we were riding out of Rawlins. Our bikes felt so much heavier with all of our extra water. But, we didn’t really have a choice.

We rode for about 25 more miles. The landscape is really starting to change again. Even though parts of Wyoming is desolate and the towns are spread out, the landscape is beautiful, and just different. 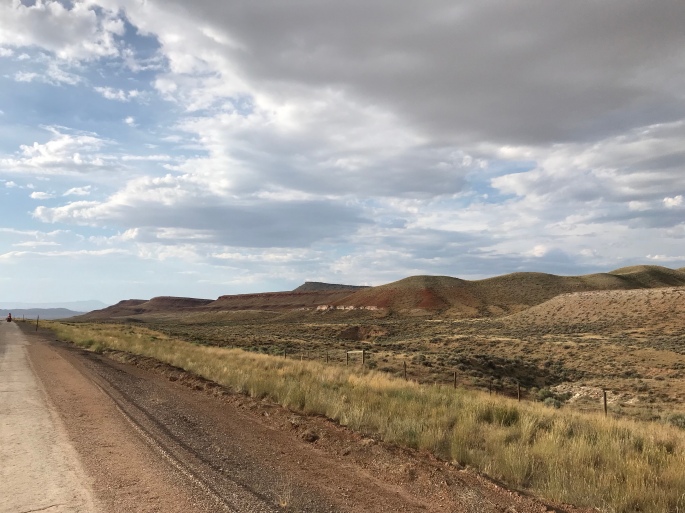 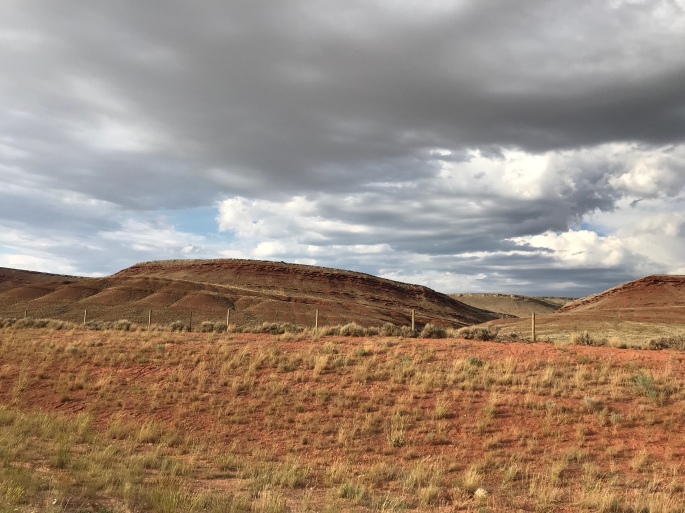 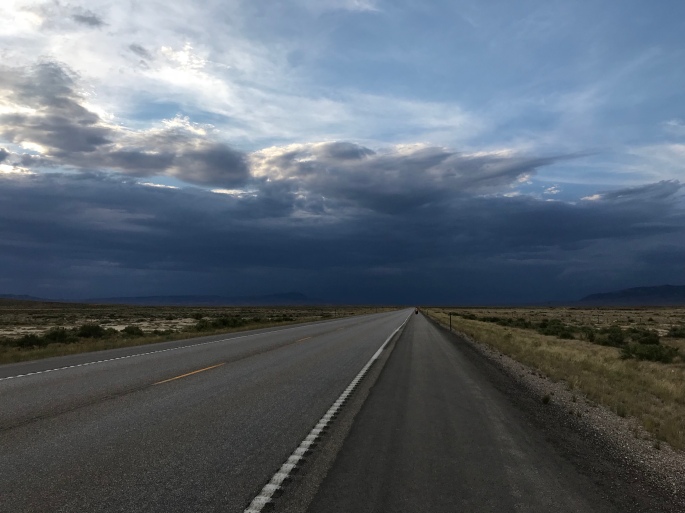 Oh! And we crossed the Continental Divide again! That’s CD crossing #2 for us! 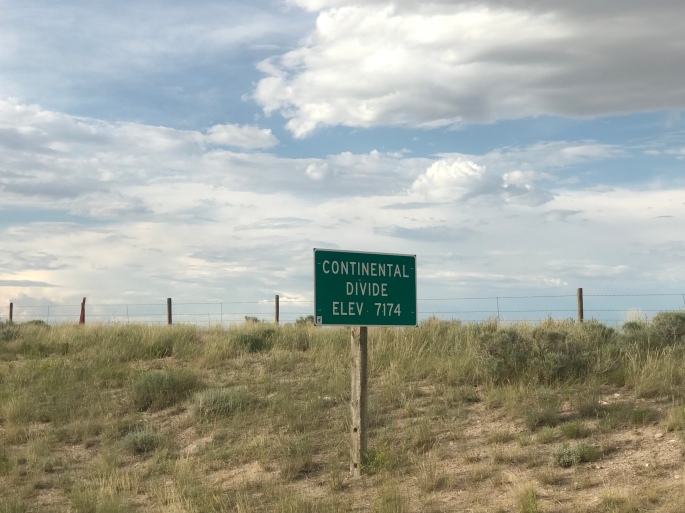 The sun started to set. Part of the sky was dark and stormy, and the other part had an amazing sun set. I remember (while driving through this area with my parents countless times) staring out the car window, watching the sunset and marveling at the colors of the sky, juxtaposed with the colors of the land. It is really beautiful out here. So many people complain about the boring drive, but there is so much to see!

You just have to look. 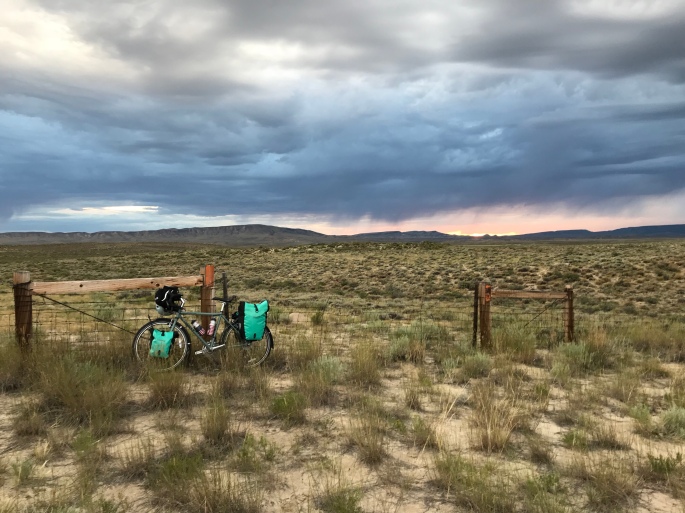 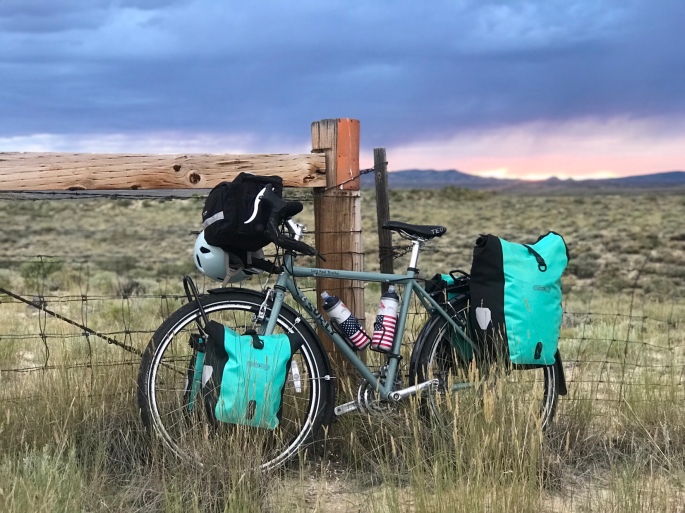 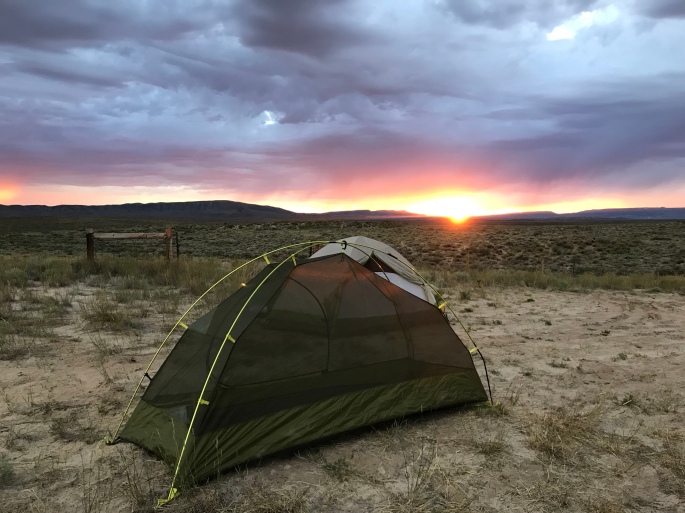 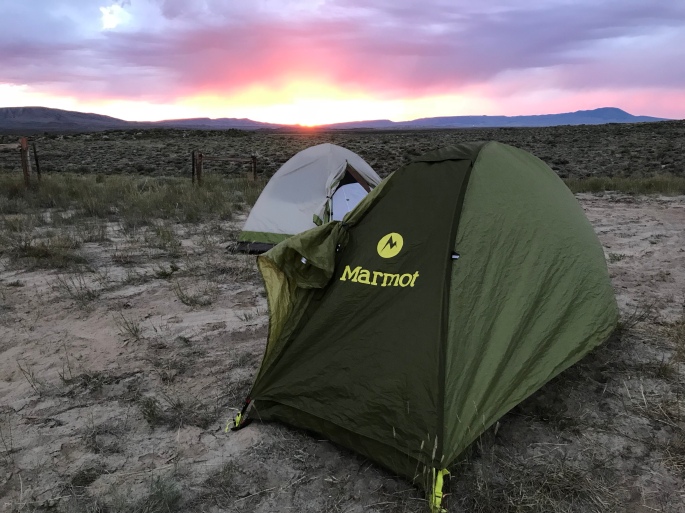