I’m going to humor you and say today was hard.

I am starting to learn that every day is hard in its own way. It’s just part of the journey. My parents always make me feel better by telling me, “If it was easy, then everyone would be doing it.” And they’re right.

1. Leaving the people I love…again.

Coming back to the route after the rest day was…odd. I felt like I went through a wormhole from luxury back to…..well….not luxury.

I talked to Craig and Dad in the car on the way to Marion. Mom unfortunately had to work today 😔. The chipper mood of our normal conversation quickly changed to a somber mood as we parked the car at the farmers market where we would be picking our route back up. We hopped out of the car and everyone was quiet as Craig and dad helped me unload my gear from the car and got my bike ready to go. Mash was upset, and we hugged each other, which made me upset. I tried to hold back my tears.

It’s hard having a normal day with your family and loved ones and then coming back to your bike tour. It’s like living in a mirage, and then it disappears.

We took a few pictures and then we had nothing else left to do but take off. 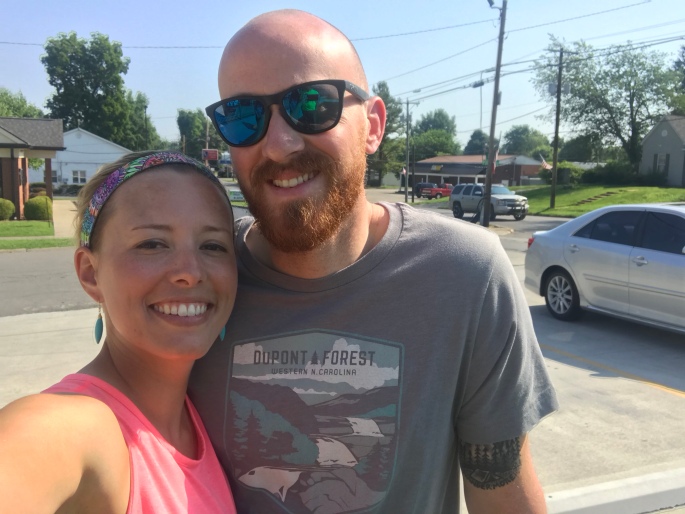 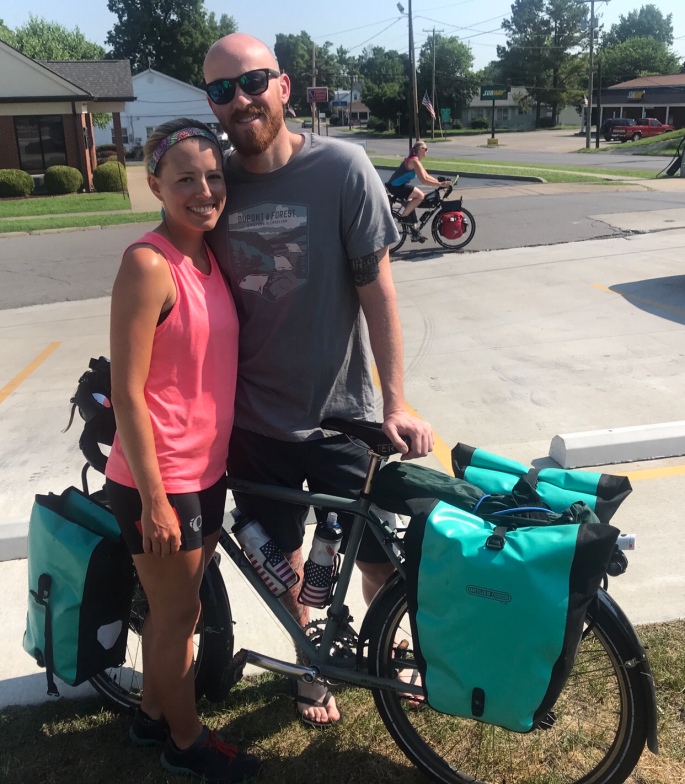 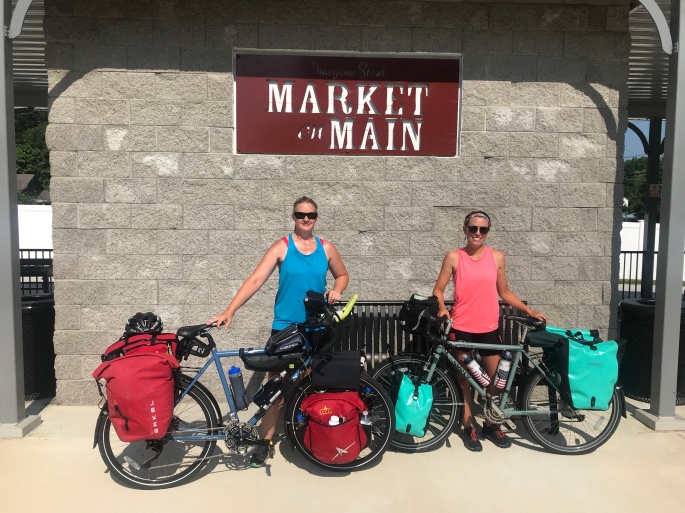 But, let me tell you what made it better: My Aunt Delana! For a little bit, I felt like we had our own sag wagon! She was on a mission: to take pictures of us riding and crossing the ferry at Cave-in-Rock since my mom couldn’t be there.

Aunt Delana would drive past us a ways, park, get out of her car, and start snapping photos of us. I kind of felt famous. This went on for 12 miles, and we were getting tickled about it. It really did make us feel better.

Masherra was having some issues with her chain, so we stopped to fix it. Our hands got covered in black grease, and guess who had wet wipes?! Aunt Delana. 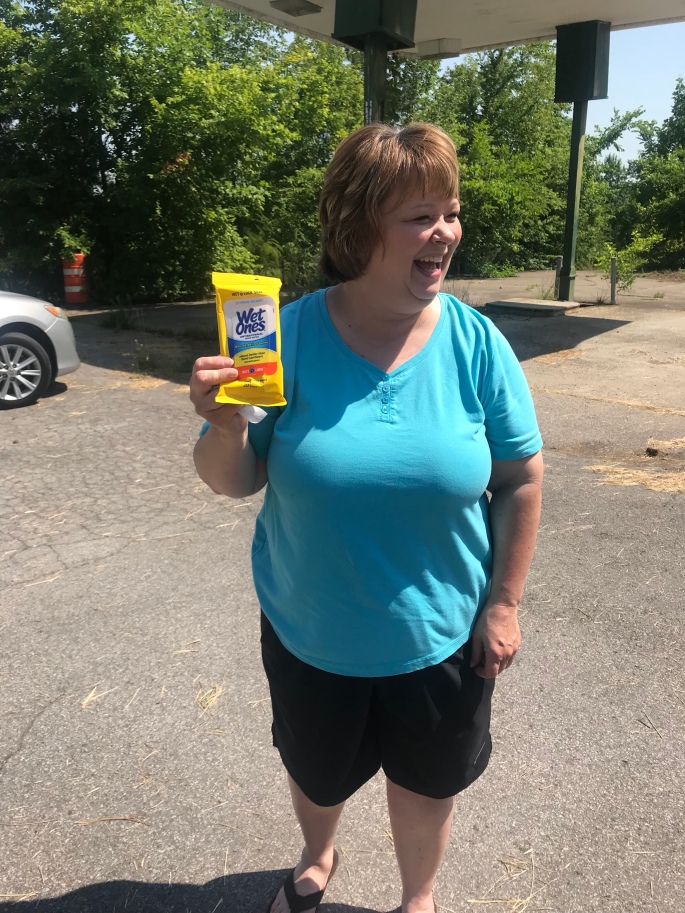 If it wasn’t for her, I would have had to use some of my wet wipes…..and guys, let me tell ya…..sometimes wet wipes are my only “shower”, so they are kind of like gold. Now that we are getting away from the Bible Belt, we may not have as many nice church showers to use….just sayin’.

We were really excited to cross the ferry. After riding bikes all the time, it’s just fun to hitch a ride on a boat! We hopped on the ferry and crossed the Ohio River into Illinois! 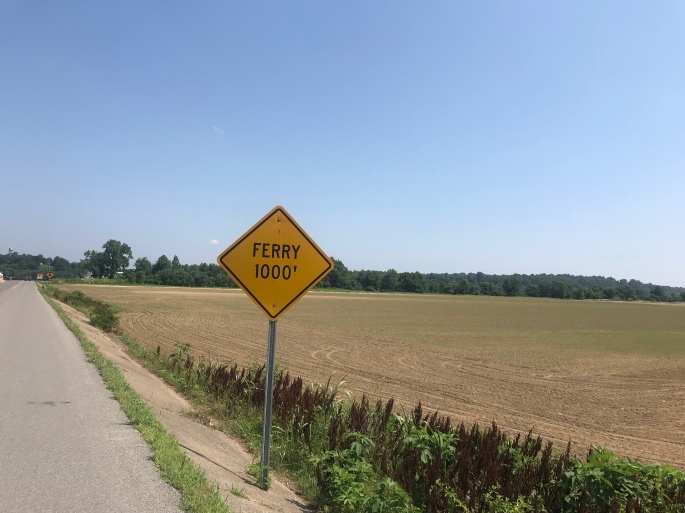 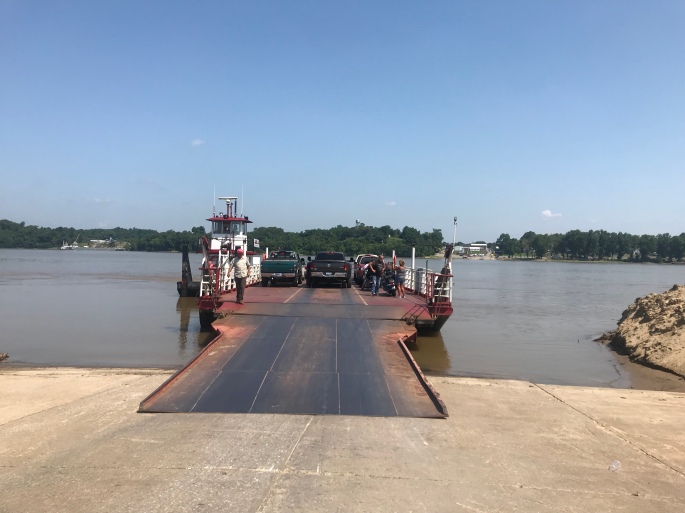 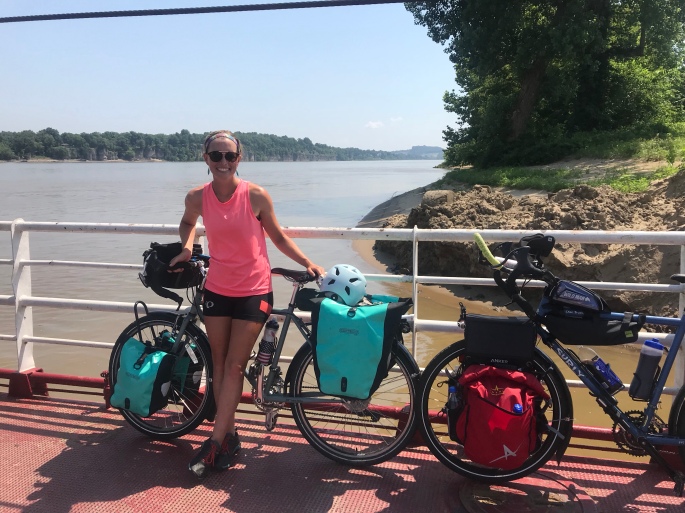 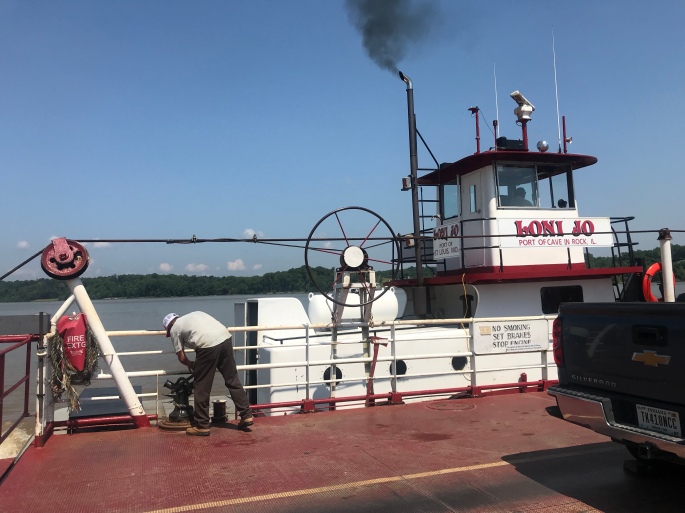 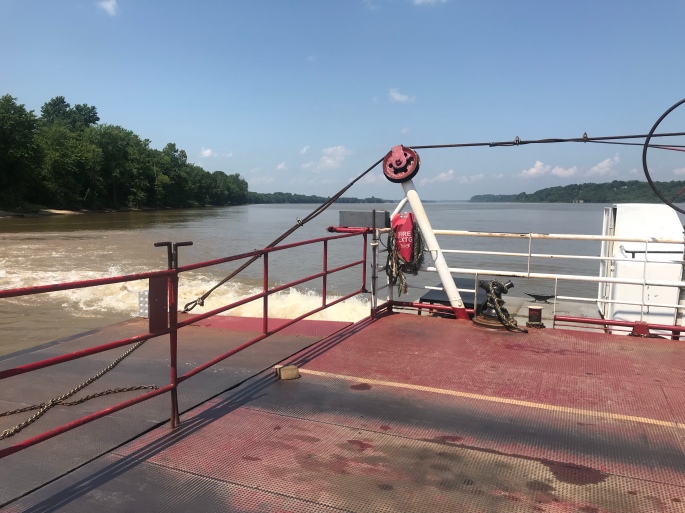 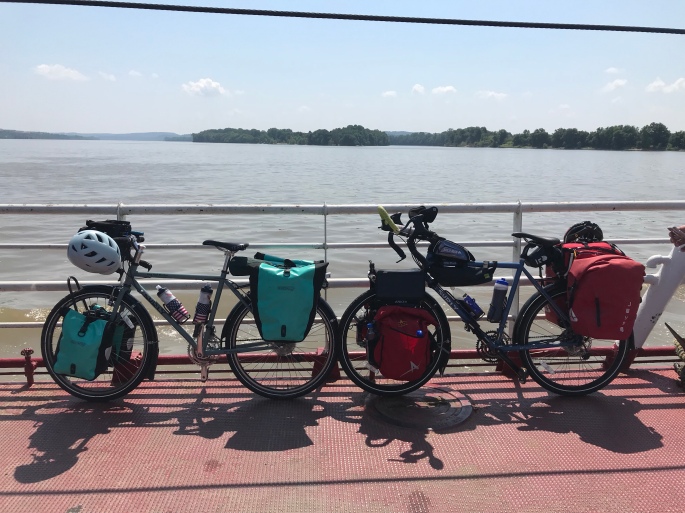 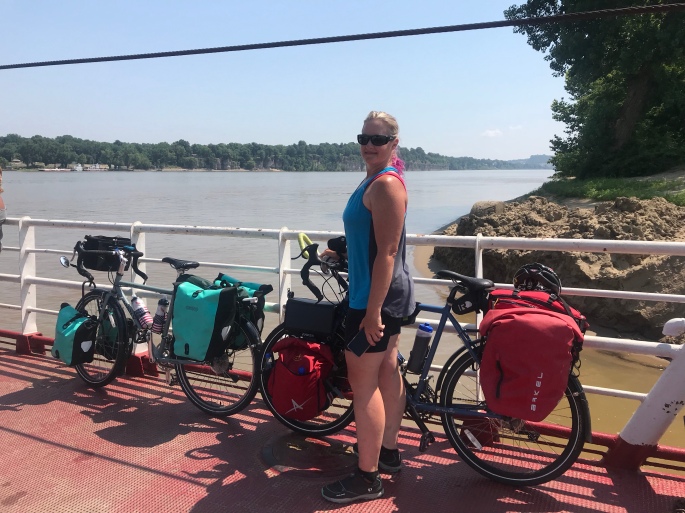 The ferry ride didn’t last very long, and before we knew it, we were pedaling again. Pedaling up hill after hill….but our legs weren’t bothering us…

It was the heat.

It was sweltering hot. I don’t sweat a whole lot, and my whole body was glistening with sweat all day long.

We came up on the cutest little bicycle rest stop in someone’s yard! It was pretty much the greatest. 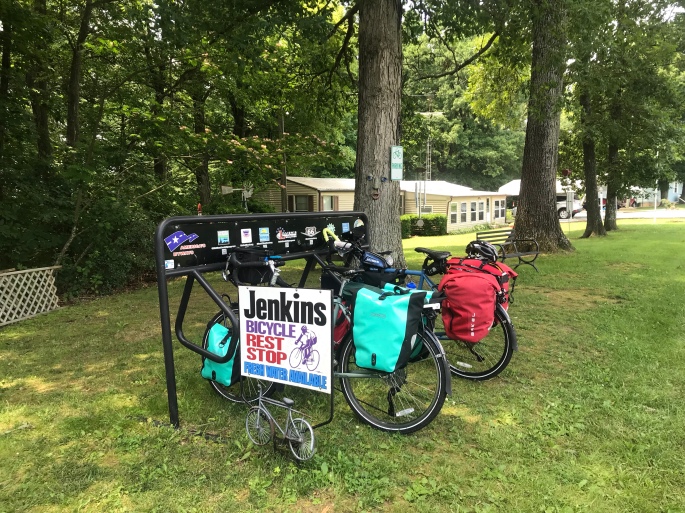 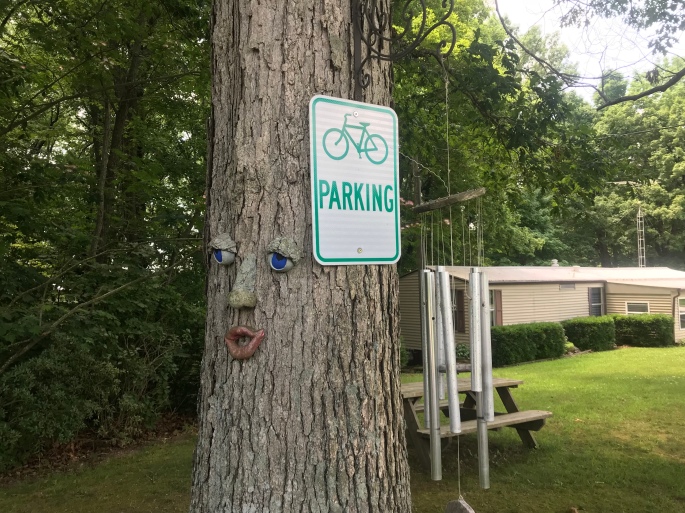 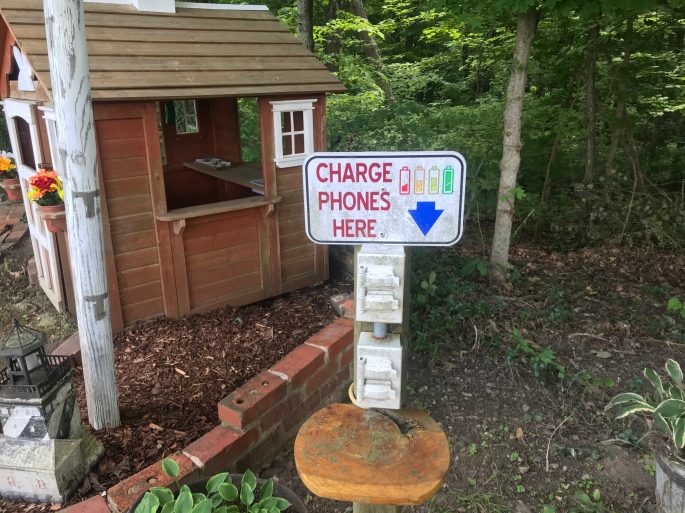 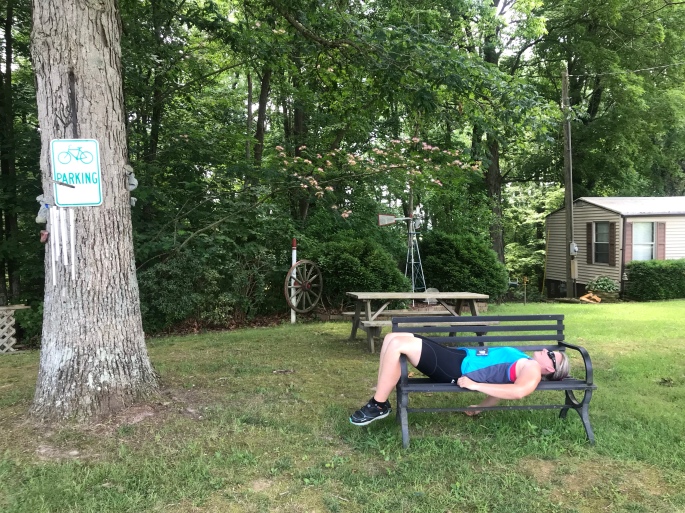 We spent the day shade hopping. We rode from one shady spot to another, hoping to get some relief from the hot sun. After a while we came to a gas station, where we ate lunch, but we had to eat outside in the heat so we could keep an eye on our bikes.

Nothing like eating hot pizza, out in the hot sun, sitting on a hot sidewalk. BUT, I had an ice-cold sweet tea, so it was all good. 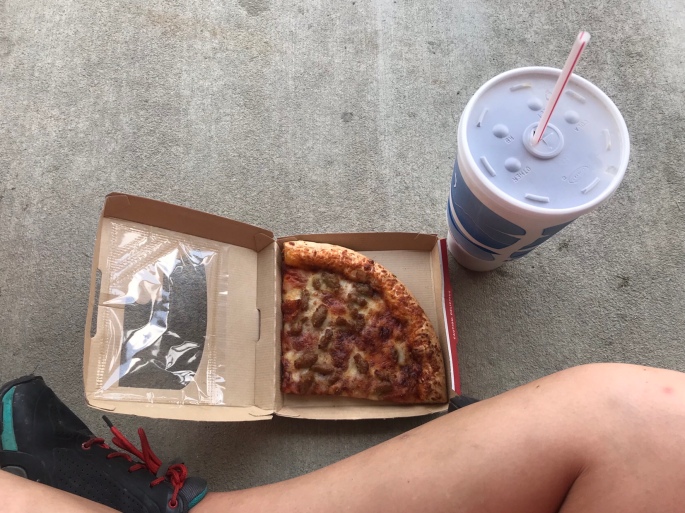 We made as much headway as we could, but with the temperatures as hot as they were, we could only go a few miles at a time without having to seek refuge under a shade tree.

A lady saw us sitting in the shade and gave us some half-frozen bottles of water she had in her car; she had just left a child’s birthday party and just so happened to have them. She told us she had something else for us, drove to her house just down the road, and came back with a cooler full of stuff. 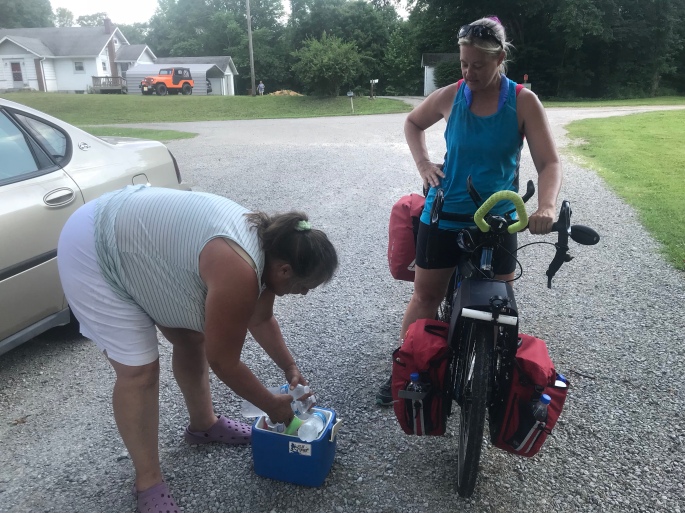 She had more frozen bottles of water, ice packs, and popsicles! 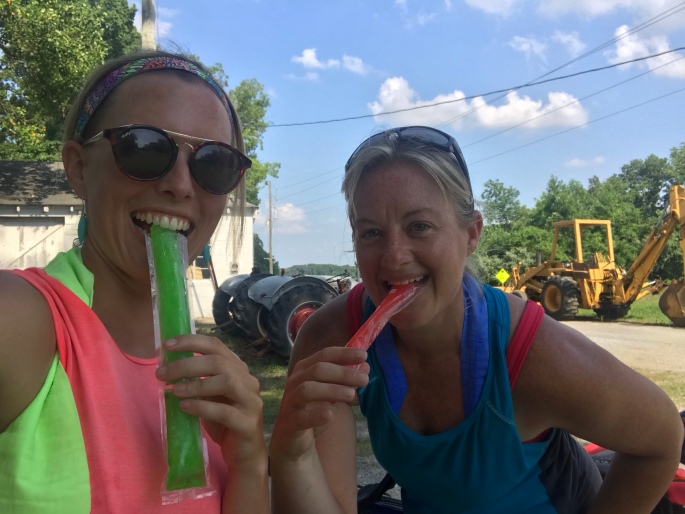 We could only take a couple of the water bottles, as we didn’t want to add a lot of extra weight….but the popsicles- they went straight into our bellies. Plenty of room in there. 😂

I had plenty of water, so I was able to wet my cooling towel my aunt got me. I was really glad to have it today. 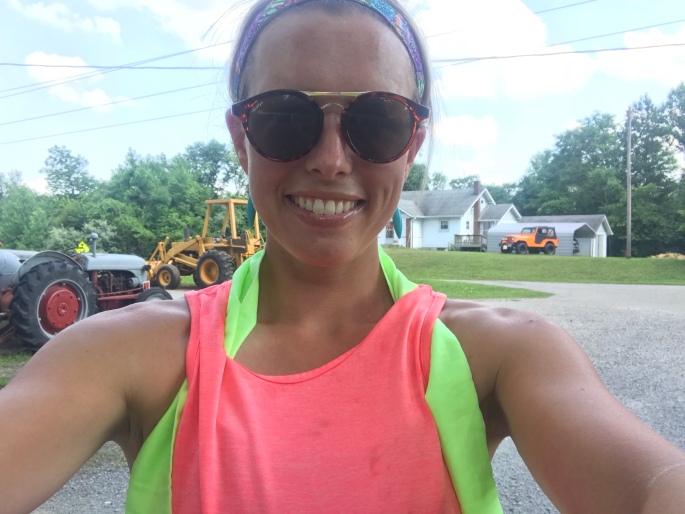 We rode on and tried to cover as many miles as we could. The heat really zapped our energy today. The lady who gave us the water and popsicles told us the heat index 104, and Craig said my gps tracker logged the temperature at 102! Y’all, it was a hot one, and we have another hot one tomorrow.

As the sun was setting, a man drove by us with his arm hanging out the window. In his hand? A cold root beer. He was going too fast for him and I to have a successful root beer handoff, but Mash was able to snag it. Too bad neither of us like root beer, but it’s the thought that counts! 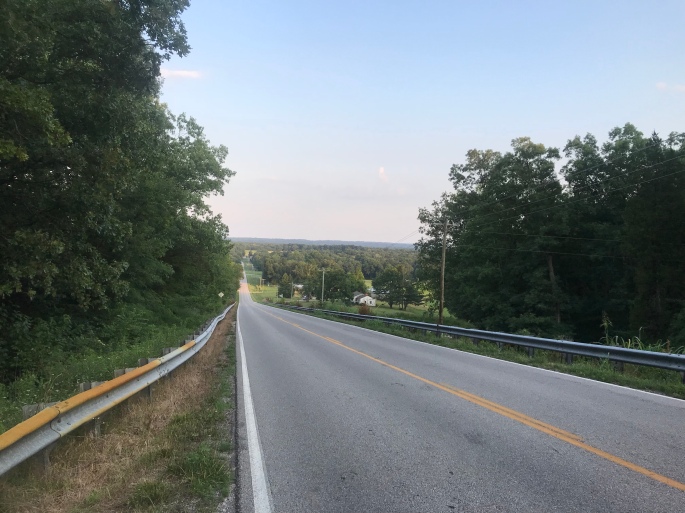 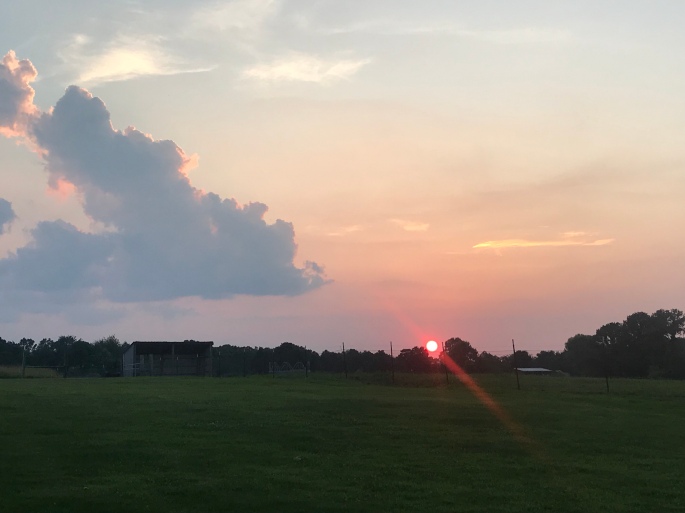 We found a campground a mile off the route. The office manager opened up the cowboy church for us to sleep in, and we were able to take showers. 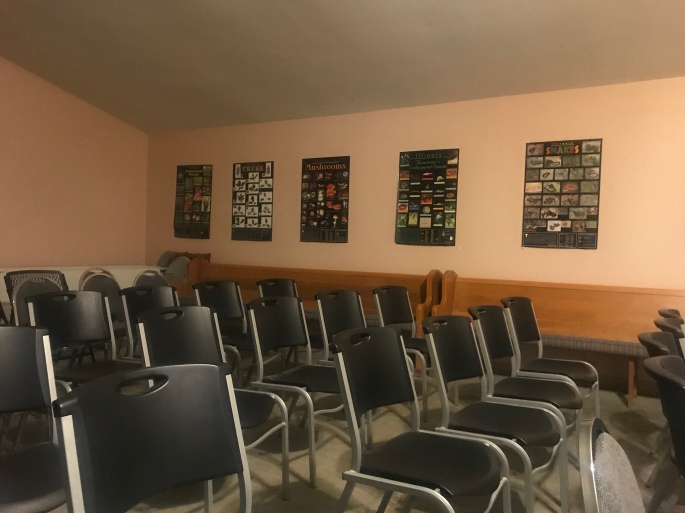 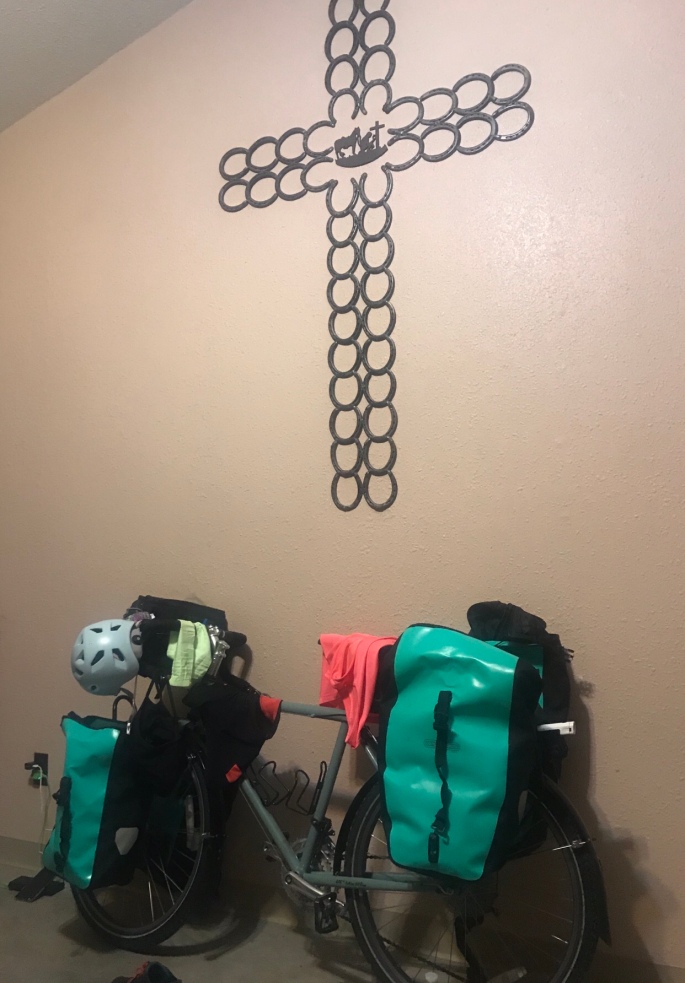 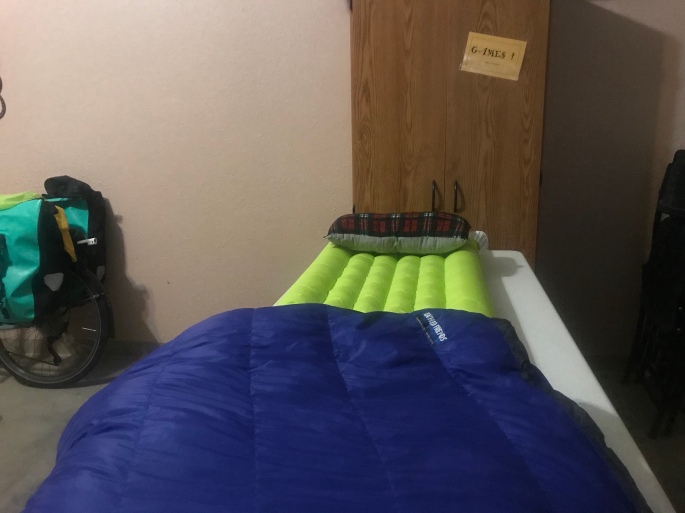 Tomorrow we are going to be TransAm rebels and try a road that is off the route. The TransAm is notorious (at least to us) for taking you to every nook and cranny there is on the map. We are beginning to look for roads that cut to the chase and take us where we need to be, but straighter and hopefully faster.

When I was aggravated about taking a detour last week, Craig reminded me that stuff like that is part of the adventure. Being presented with a problem and having to figure out how to solve it is a huge part of bike touring, and a huge part of life…and sometimes it’s scary.

But, as I was walking to the showers this evening, I saw this, and I felt better: 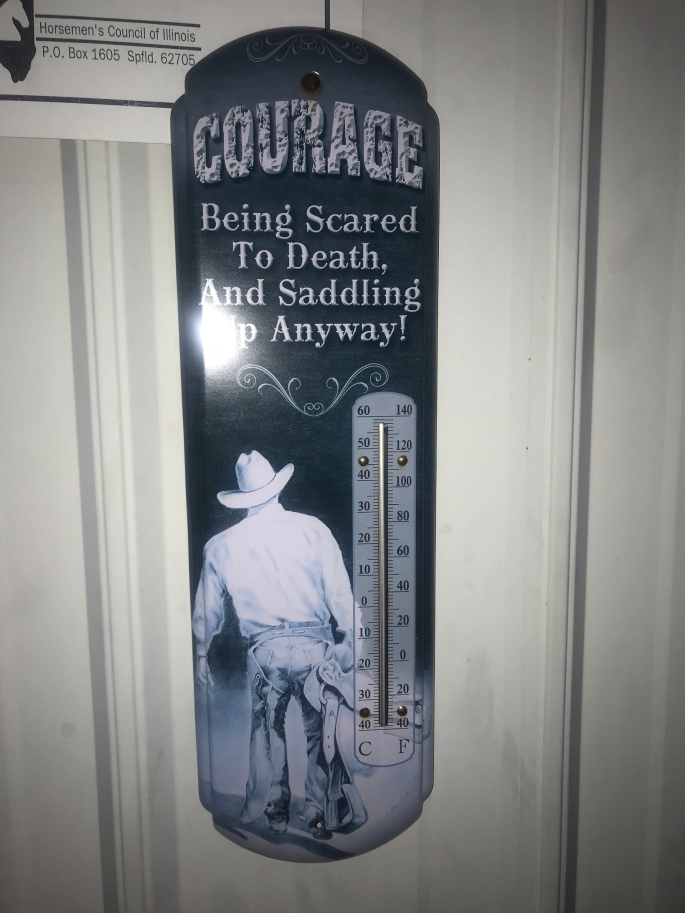