It seems like every time we get close to a rest day, crossing the state line, getting a lot of miles in, or arriving home, Mother Nature throws a wrench in our plans….on purpose.

Today started out great. We were riding through the KY countryside, and there were the usual pretty barns, fields, and horses. 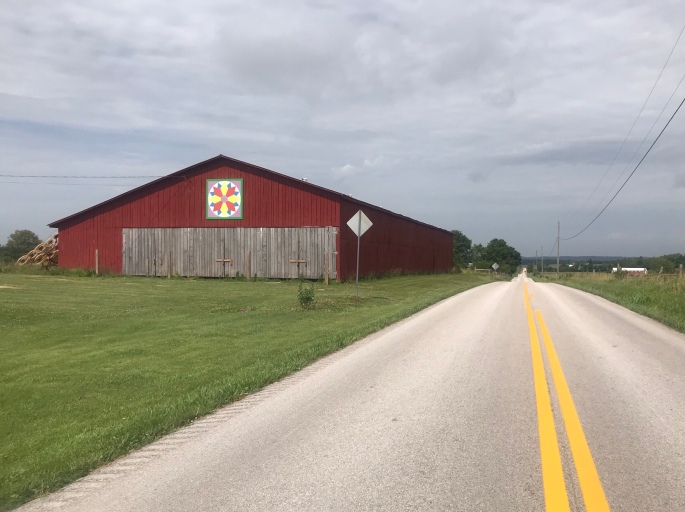 As the temperature started to heat up this afternoon, a man passed us on the road and stopped to give us some cold bottles of waters. He had been working and was heading home, so he told us he didn’t need them anymore. He was really nice and called me “sugar”. ☺️

We saw a Paducah sign and got really excited!! 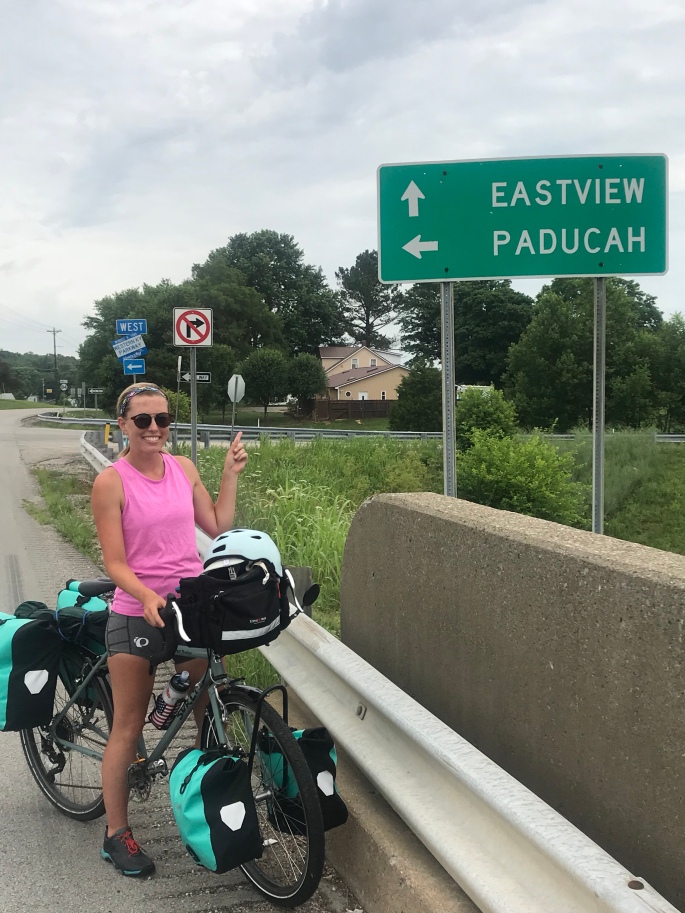 But, the day got harder as it went on. We are in the knobs region of KY, a region that has hundreds of conical hills, so as the day went on, it seemed like we were climbing hill after hill and couldn’t catch a break. Throw in the fact that we are so close to home, and it just kind of eats away at you. A couple of the hills, although they were short, were the steepest hills we have seen this whole trip. Sometimes I would see a hill and think, what are YOU doing HERE in KY??

Today was definitely a mental game. Our legs are conditioned for these hills, so it didn’t really hurt to go up them. However, I have had a deep muscular pain in my left glute (not from my saddle) for a while, and it definitely doesn’t help things.

We were dodging storms all day long. Masherra was a little ahead of me because I was being a storm chaser and taking pictures of the clouds.

We had to take shelter in a barn on the side of the road. I rolled in just as the wind picked up.

As the rain cleared off, the man who owns the barn saw us and offered us some cold Gatorade!

We trudged on for a while, and another storm came…except this time we were out in the middle of nowhere. We somehow saw a house through the woods and there was a canopy in their front yard, so we went and got under that for over an hour until the storm cleared off.

After the storm came through, it was after 8:00, it was still raining, and we still had about 11 miles to go to the place we were camping at…….in pitch-black darkness. Thankfully we have lights for riding at night, although we try to avoid it.

When we arrived at the park we are camping in, we were startled to see someone under the pavilion. The person had a headlamp on and I caught a glimpse of a bike! A biker!!!!!

We are camping out with Dex tonight– he is from Colorado. It was really fun to talk to him about other people biking the TransAm–he knows Deb and Mike who we met a couple of days ago. Dex was the one who told them about the road being closed, and then Mike and Deb told us! It’s fun to start to see a community of bikers out on the TransAm and to see how our lives eventually intertwine.

Dex started a day before us, so it helped us feel like we are on track and on the same level as other bikers. We are a couple days behind on our schedule based on 63 days (we actually have 68), but there will be opportunities to make up mileage later, and if we are still behind once we enter Colorado, we have the option to take the Western Express bike route to San Francisco, which is 500 miles shorter than taking the rest of the TransAm (about a week’s worth of riding). Either way, we are dipping our tires in the Pacific Ocean, people!

Due to the weather not cooperating the past three days, we are going to make it home on Thursday rather than tomorrow/ (Wednesday). We would have to ride 96 miles to make it home tomorrow, and there is a chance of rain, so it’s looking like we will arrive sometime on Thursday. Sorry for the schedule change, but you never know what’s going to happen from day to day. We will keep you posted!