Today was like a hamburger. Most of today was pretty flat and easy, but it was sandwiched by some tough spots.

BUT, compared to yesterday, today was an extremely easy day.

It was so nice sleeping in a hotel. I fell asleep and didn’t wake up until I had to. It was glorious. I was also able to take a shower, dry my hair, eat a good breakfast, and stock up on some supplies from the gas station.

We always get attention at gas stations. People see our loaded bikes leaned up against the wall and come up to us and ask questions and wish us good luck. I’ve even had people ask me to write down my blog address for them so they could follow our journey.

The ride out of Lexington was really pretty. It took a little bit of time, as it’s slow navigating riding through cities, but I really enjoyed it. 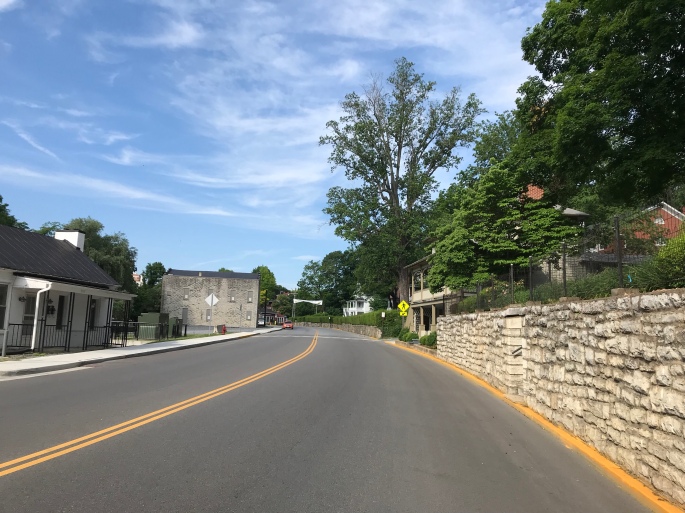 There were some hills in town, and I felt a bit discouraged after the day we had yesterday. But before I could get too discouraged, down, down, down we went.

And then back up.

But then we went down some more! And before we knew it, we were in the beautiful Virginia countryside, nestled in between two mountains. 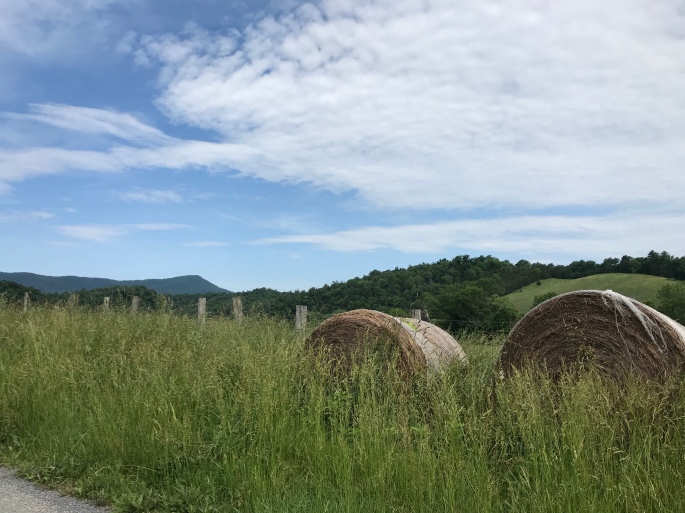 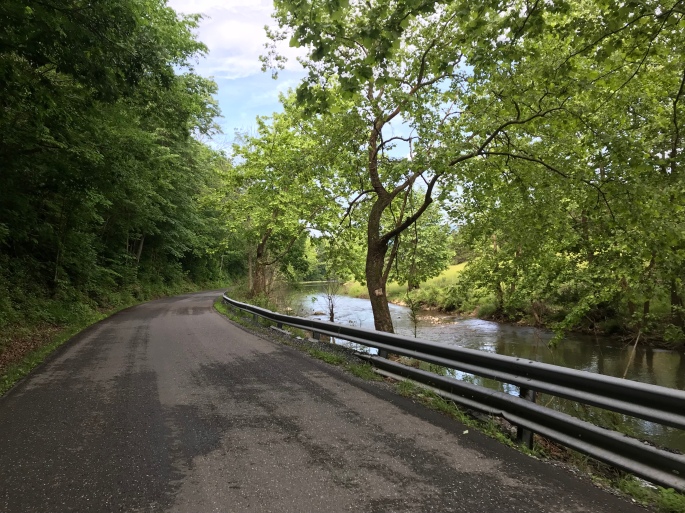 We were following a stream, which is always a good sign. The road was slightly downhill for quite a while.

We passed so many beautiful homes. I felt like I was in a movie or a dream. The sun was shining, the tall grass was gently waving in the air, birds were chirping, red barns stood in the distance, roosters were crowing, beautiful horses were grazing, and the list goes on. 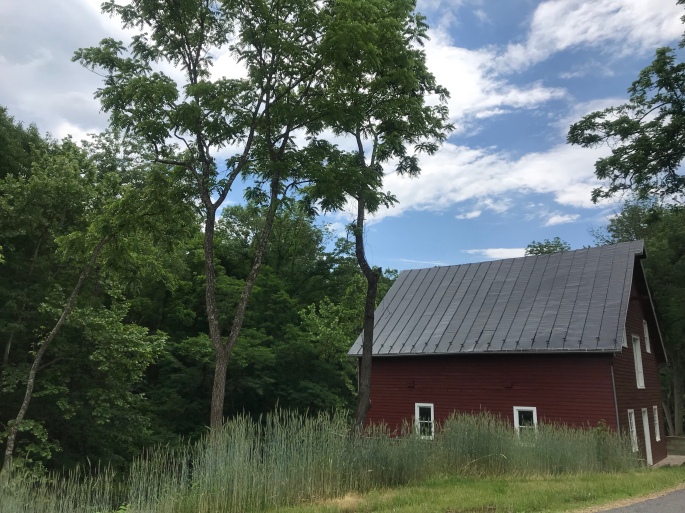 An elderly man invited us in his home to top off our water bottles. Mine were all full, as I had been drinking Gatorade, but I went inside with Masherra. He lived in a beautiful farmhouse built in 1850! The front door was huge and wide. The inside was pleasantly modest, and the wood floors looked really old and they creaked when you walked on them. I wanted to live there! 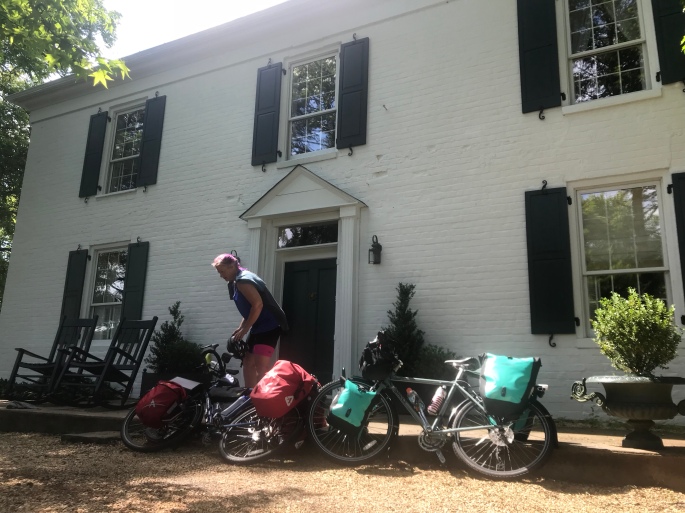 The man even asked us if he needed to check our tire pressure. We had just topped off our tires, so we told him we were good to go. I could tell he was a kind man. Although he seemed happy, I could also sense some type of loneliness. I wondered about his life, who he was, and if he was or had been married.

At first, I thought my bear spray had somehow gone off in one of my panniers. I looked back… it was a flat.

I’m not going to lie, as much as I hated that we were going to have to stop and lose some riding time, I was kind of excited about changing my first flat of the tour. I mean, hopefully I don’t get many more, but it felt good to get it out of the way and gain some flat-fixing confidence. The only other times I have fixed a flat was in my bike repair class, and on my back porch with my dad watching me.

We had to unload my panniers before we could fix the flat. 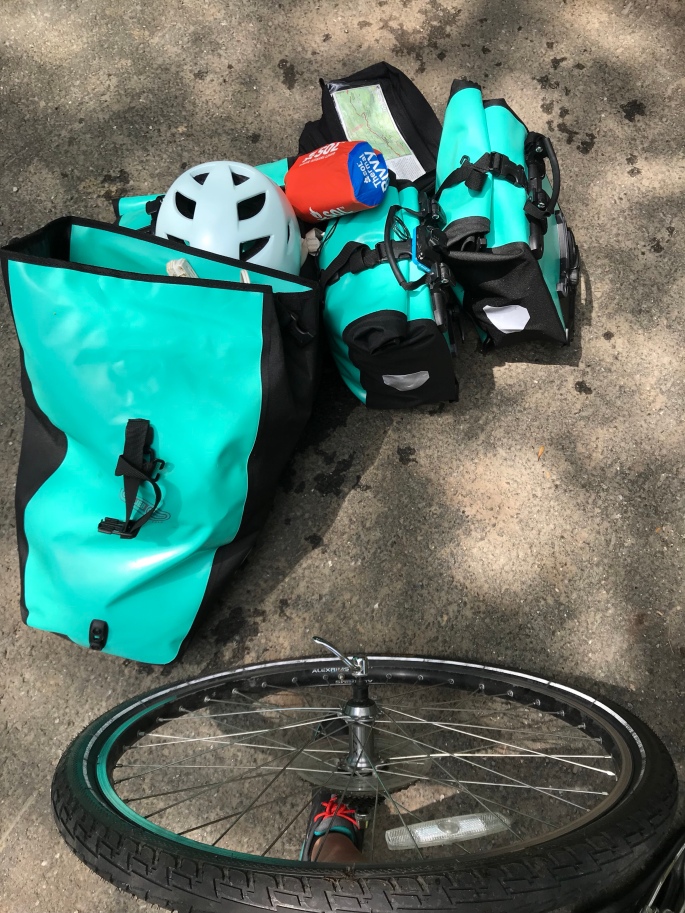 And then, just hours after having my first shower in about 4 days, I got chain grease all over me. It was actually quite comical. 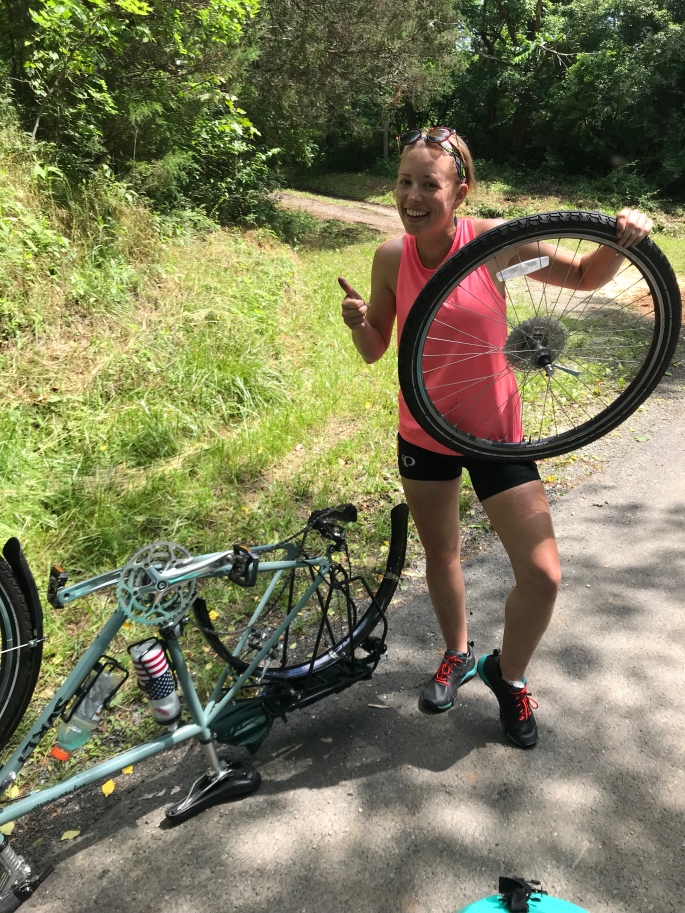 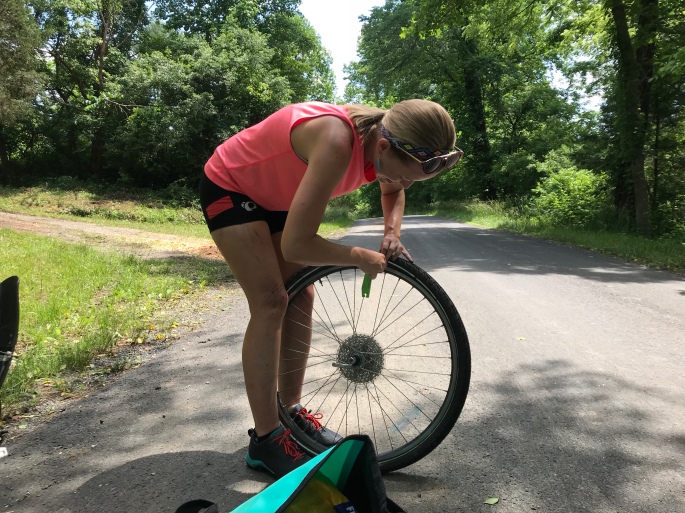 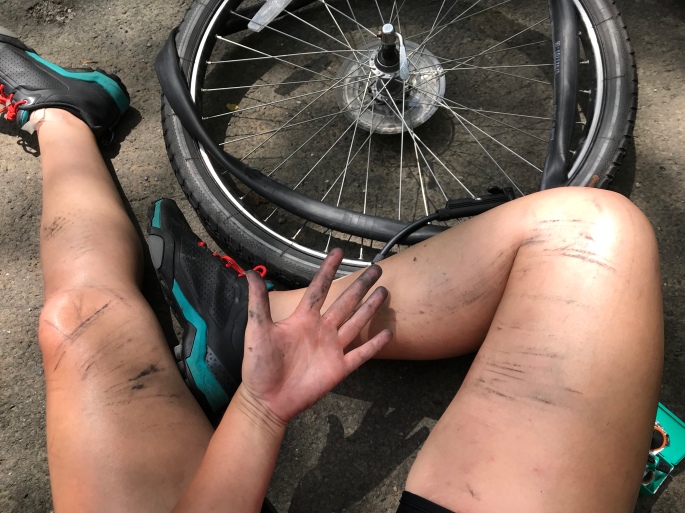 And I’m going to be honest with you again…..I may or may not have been so tired tonight that I didn’t wipe it all off. 😂

The ride today was really, really pretty. There were a few sections that were taxing–we had a few rollers (hill after hill after hill). It was kind of like a roller coaster: slowly ticking up to the top, and then you go really fast down.

Masherra’s bike weighs a bit more than mine, so I get jealous when she is able to roll up the hills further than I am after a descent because she has more momentum.

At one point today, we were in a very “beary” area. It just looked like a place you would see a bear….and we think we actually saw one.

I saw a big, black animal trotting in the weeds. It didn’t move like a dog, and was too small to be a cow or a horse. So, I got my bear spray handy….just in case. 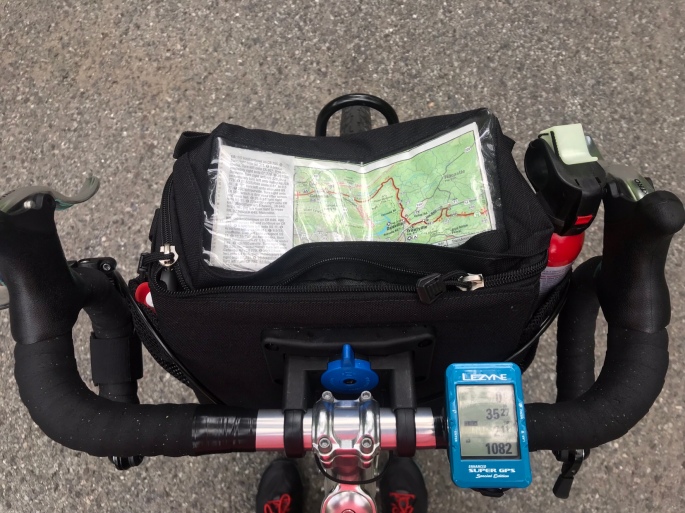 A bit later, the wind started blowing, the clouds started swirling. We started seeing lightning and hearing thunder. It’s hard to know which direction the weather is coming from when you’re not from the area, but we watched it for a minute and saw that the storm was moving perpendicular to our route, so we booked it on out of there and missed the storm! Didn’t you know bike tourists were also meteorologists? 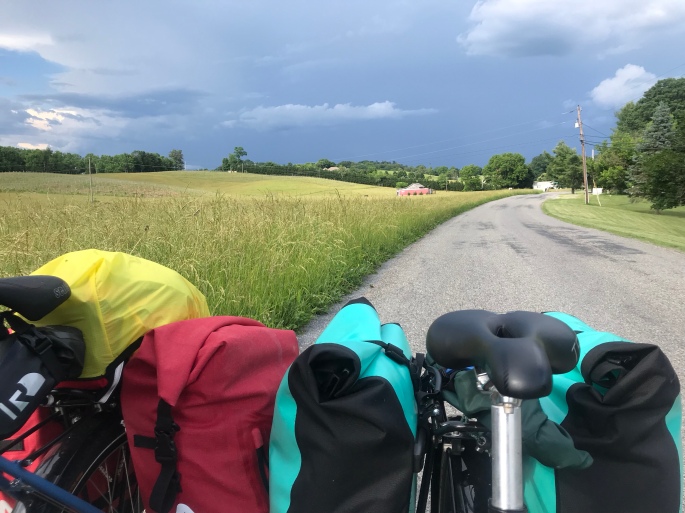 We came up on a gas station and decided to get some more Gatorade. We couldn’t decide if the chairs on the front porch were actually super comfortable, or if it was the fact that we have been sitting on a bike saddle for the past week. 😂💁🏼‍♀️

After we went through Troutville, we couldn’t decide whether to press on to our planned destination, which was 15 miles away, or stay in a little town outside of Troutville. The 15 miles we had left were in a remote area, and it was getting late….not to mention clouds were rolling in.

We decided to stay at a local sports complex. It was an ordeal because when we rode up to the complex, there was a baseball game going on and we didn’t want people to see us or think that we were up to no good. We called the sheriff’s department (it took 45 minutes to find the right number and actually get a hold of someone) and after some convincing, they let us camp. 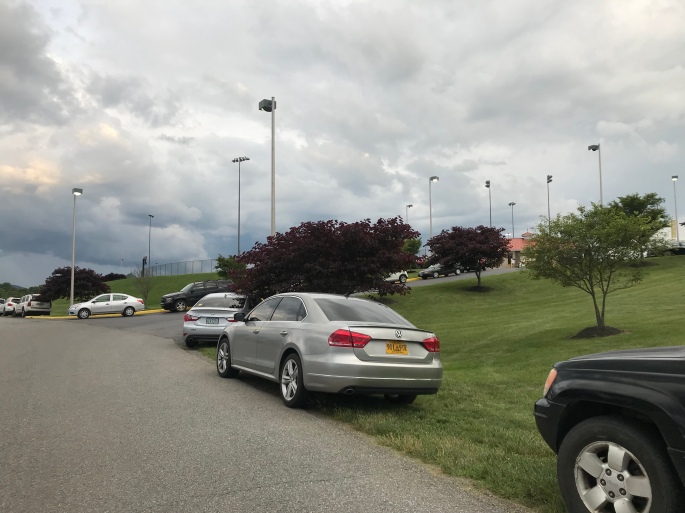 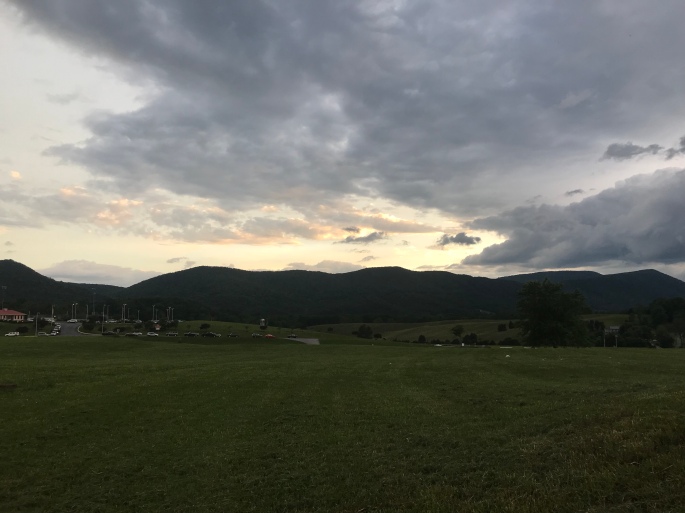 I was disappointed we didn’t make our destination for tonight. I made a schedule that was based on 63 days, and we are currently a day behind. For some reason, I had a hard time getting it through my head that:

1. The Appalachian’s are one of the hardest parts of the TransAm, and there will be many easier days ahead.

2. The schedule is based off of 63 days, and we actually have 68 days, so technically we are right on schedule.

When you’re this tired, it’s easy to get frustrated. When I was frustrated about our camping spot tonight, I kid you not–I looked up and saw this:

I knew everything would be fine. I remembered a quote the U.S. KY Ambassadors of Music band director said to us before our first concert in Europe:

“Your shirt is fine. Your tie is fine. Everything is fine.”